Did I ever think I would be interacting with penguins in Antarctica in my lifetime? Never! It had always been my dream to go to this remote continent, not my husband’s. However, at the end of 2011, he was tasked with heading up the Titan Helicopter support team for the take-over at the South African base, SANAE (http://www.sanap.ac.za/sanae), in Antarctica.  I was allowed to go with him – as a ‘Fireguard’!

Read my full account of the whole trip here: https://footeloosefancyfree.com/antarctica-3/

On the 8th December we set sail from Cape Town on SA Agulhas 1, it’s last voyage to Antarctica  https://www.environment.gov.za/sites/default/files/docs/publications/SA_agulhas.pdf) We reached the ice-shelf on the 23rd. Many of us remained on the ship while off-loading and transporting was being done, To alleviate boredom, the Captain cruised back and forth along the ice-shelf, On the 2nd January 2012 he moored at a bay where we could get off onto the ice. The Captain and his crew stayed on board and kept a watchful eye from the bridge in case any cracks appeared!

For the first time we are togged out in our full ice kit; thermal pants and tops, thick socks and the huge double boots, waterproof, windproof dungarees and jacket with our thick fleece coats under that. Then most of us have on our woolly hats, gloves and sunglasses. Oceanographer Jackie, a New Jersey girl says that it is this temperature for 4 months of the year, so she is in t-shirt and shorts and no hat. We are all swung across, 4 at a time, in a rope basket and I’m in the first one with Jackie and two Amys, also Oceanographers. Later we all end up shedding as it is amazingly warm. 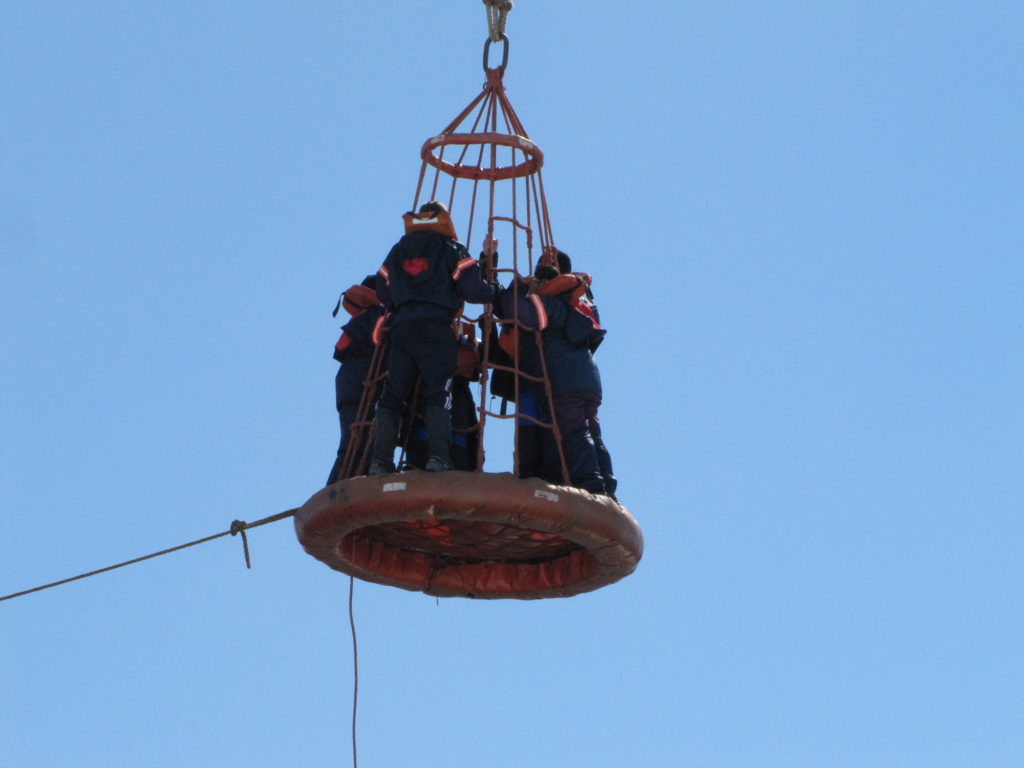 The Adelies come running to see what’s going on – waddle, waddle, waddle, hop, waddle waddle, hop. They come quite close. And all day long new groups come running – how does penguin telegraph work? Later I lie on my tummy and inch closer and closer to a group of three and the Amys come and join me. Later still I have a group of 8 of them all to myself, almost within touching distance. 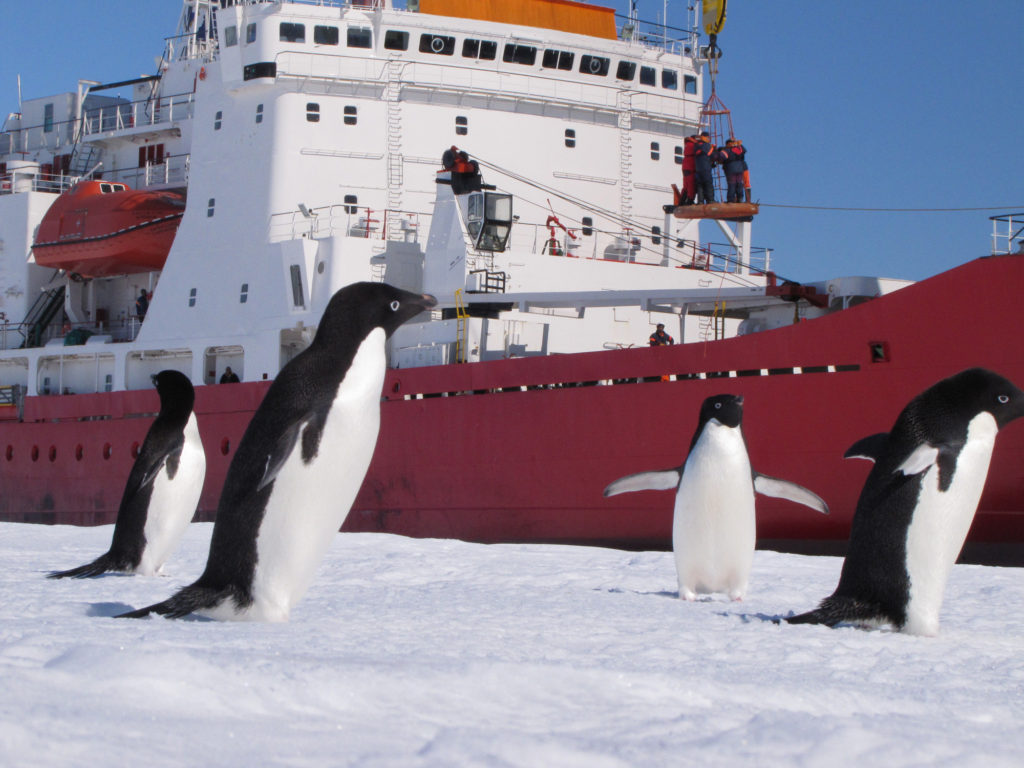 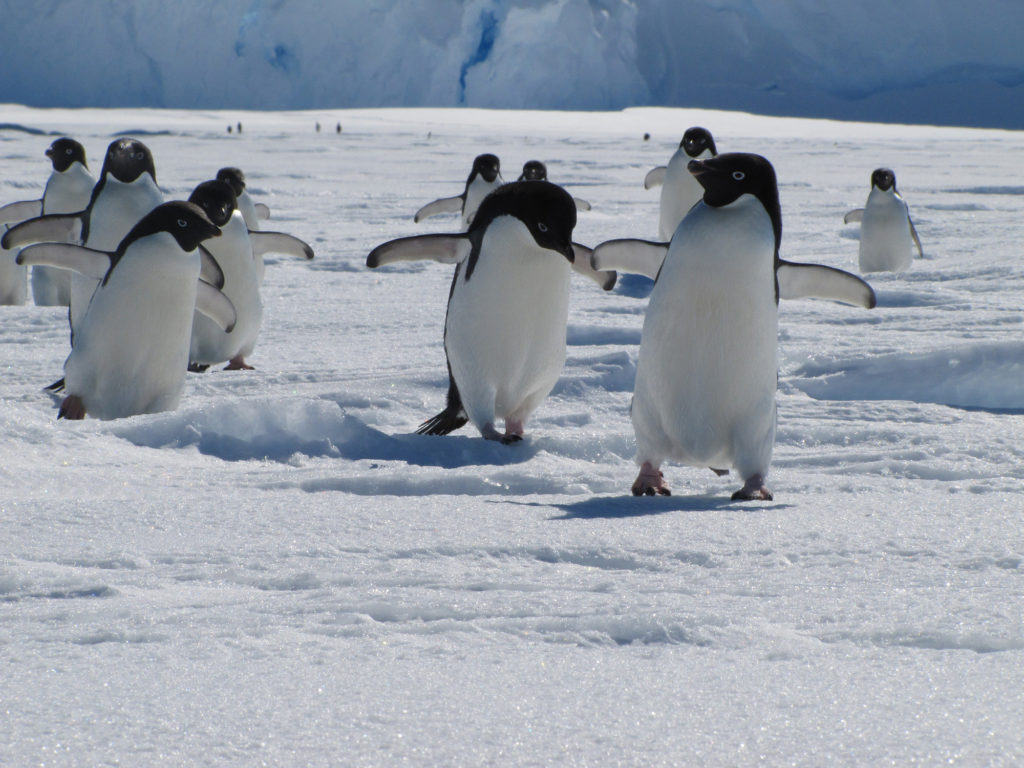 Up close and personal….

with Adelie penguins:  They lie dozing on their fat cushion tummies, pink webbed feet tucked neatly into their feathers. Flippers are either tucked in against their sides or held out like airplane wings. Their stiff tail feathers, descending from long to short, protrude from under an upside down U-shaped flap. On either side of the tail, soft black and white pom-poms adorn their little bums. There are slight differences in their flippers, and in the demarcations of black backs into white tums.  Their closed eyes disappear into their black feathers, but when I crunch closer, they open them and the white ring shows…and it feels like a dirty look! But then they nod off again. Every now and then they stretch, beaks open, backs arched, flippers up, one leg and the tail stretched out, the other leg keeping balance. Then the one closest to me stands up and preens. His front is a beautiful pearlescent creamy white and the black white yin yang curve at his neck is very clearly defined. He holds out his stiff cartilaginous flipper and nibbles along its upper edge. He curls his neck and nuzzles into his upper chest feathers with his mottled pink and black beak. Then he stretches, almost on tippy toes, with his beak pointing skywards, and manages to make himself look quite thin…… 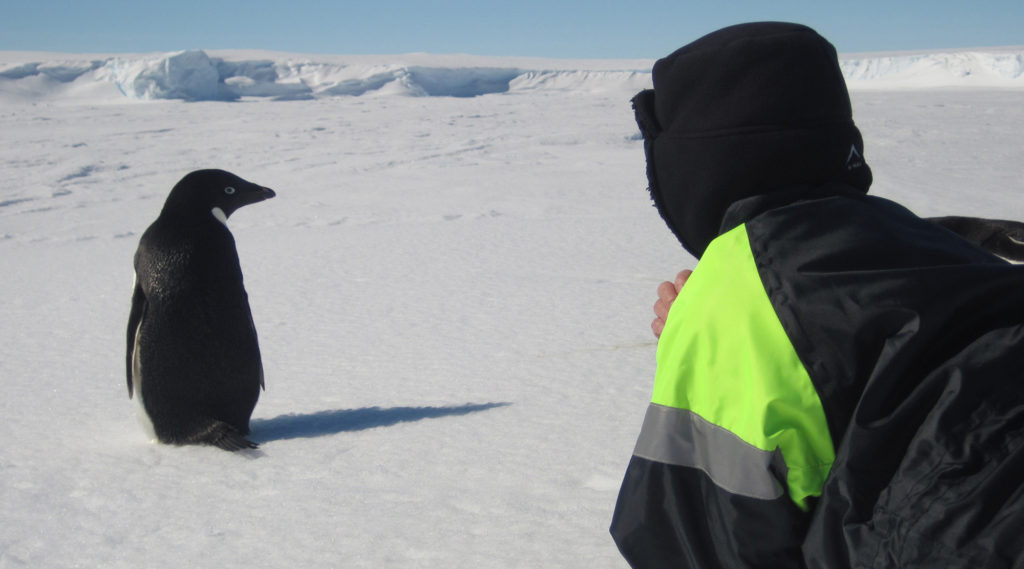 And now three Emperor penguins have come closer. They are much bigger and don’t run. Their gait is ponderous.  Very royal they are in their exquisite black and white ‘tuxedos’ with accents of egg-yolk yellow, and their long elegantly curved beaks. 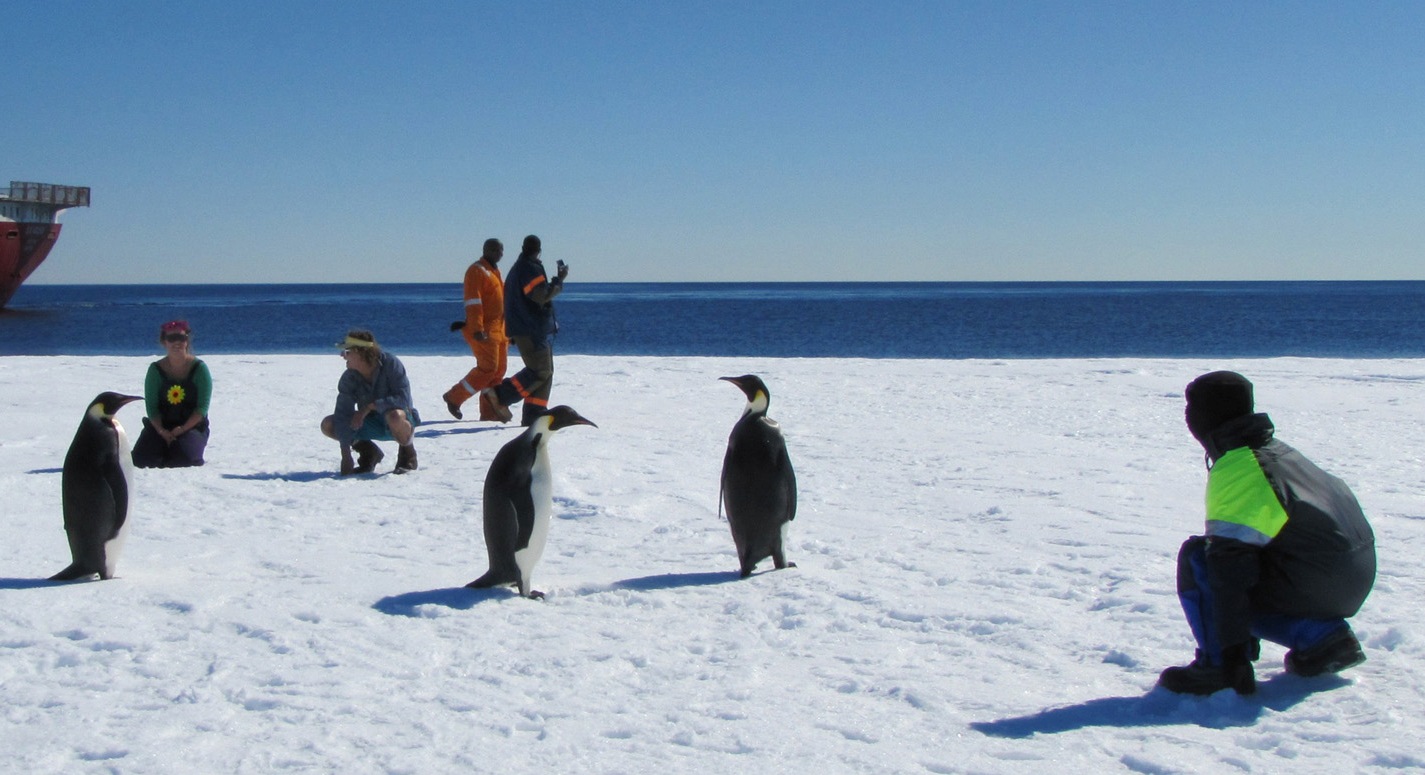 There is a flurry amongst the penguins on the ice as some others pop up in the water and head for the shelf.  Those on the ice plop in and the others fly out in graceful yet comical arcs. 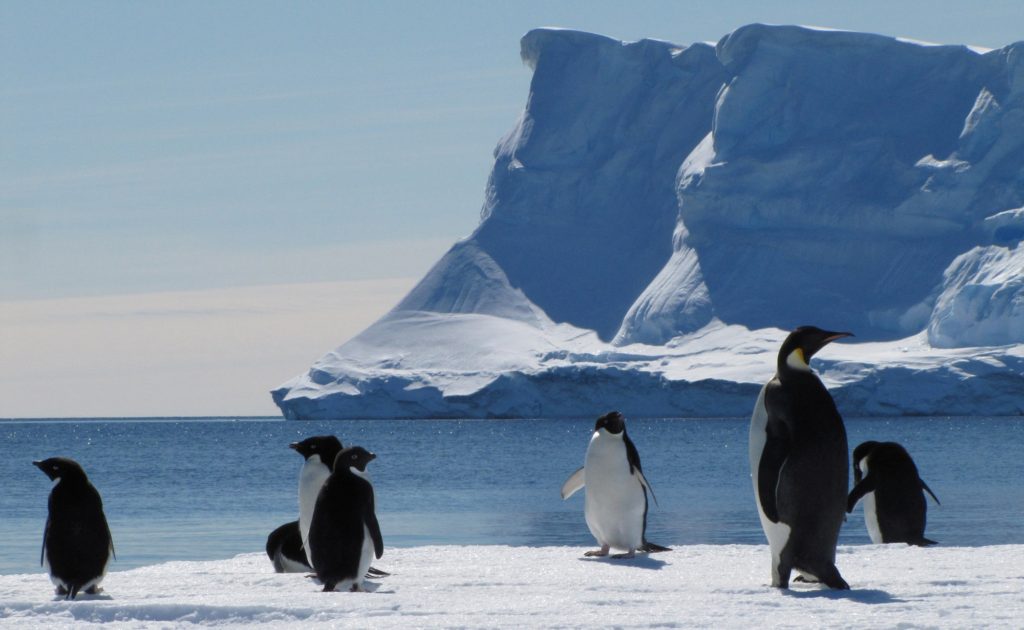 Emperor and Adelie penguins in Antarctica

All good things come to an end

Other little Adelie penguins strut nonchalantly between the people playing soccer! Snowmen are built, there are snowball fights, the Amys do crazy antics. I’m in the 2nd last basket with some other Oceanographers. We’ve missed lunch but who cares?  We’ve had 3 and ½ hours of pure privilege, one of the best days of our entire lives. I’m just so sorry that my husband missed it.

Later, the rubber ducks and lifeboats are let down onto the millpond calm water to have a run around. The water looks inviting, but we’re not Gordon Pugh, so that’s out. And the sun still shines in a clear blue sky.

Record the memories in paint

Later, I felt inspired to do some paintings of the Adelies and Emperor penguins in Antarctica. 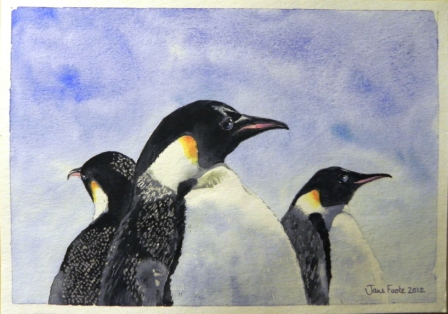 4 thoughts on “A RED LETTER DAY in Antarctica ”