Introduction: We had the privilege of going to Antarctica at the end of 2011 through to March 2012. This is one of the highlights of our stay at the South African base, SANAE IV. You can read the entire story of our trip on the Antarctica page:  https://footeloosefancyfree.com/antarctica/

The ugly sister, dressed in shapeless dungarees and jacket, huge grey boots, gloves, balaclava and  yellow-wee snow goggles, and her ‘handsome prince’ (in similar gear), climb aboard their state-of- the- art  luxury chariot-sled. It has padded seats with straps to hang onto and runners to rest your boots on. Two attendants accompany them and they all sit snugly, one behind the other. Their gung-ho horseman-pilot, Janneman, mounts his horse- skidoo, rubbing his hands in glee at the thought of whipping his steed into action and conquering all obstacles in his path. The chief horseman/charioteer, Rinier, will pull the chariot carrying only backpacks with necessary stuff:  gear in case of mishaps on the way to or at the Palace and  drinks for guests on arrival…and a ladder…. yes a ladder. The other invited guests, dressed for the Ball and in jovial mood, sit astride their chariot, champing at the bit. There are 11 in all going to the Ball.

The horsemen whip their steeds into action – Johan, the third horseman and 2nd in charge, stands up in the saddle – and they’re off, skimming over the ice and juddering over the bumps. Soon an unfamiliar bum has pinned the ugly sister’s hands down. Her shouts are drowned out by the snorting of the horses and the whistling wind. She manages to yank them free and grabs onto her ‘handsome prince’s’ legs behind her.  Soon the base is far behind them and they are heading down a slope to the bottom of the mountain on which SANAE IV is perched. (The Norwegians named it Vesleskarvet, the little barren mountain, a bit of a misnomer, in this ugly sister’s opinion!) It’s a beautiful windless, cloudless, cobalt blue sky evening.  On one side, snow-flanked mountains tower above them and on the other, the icy plain stretches away into the ‘not yet setting’ sun. 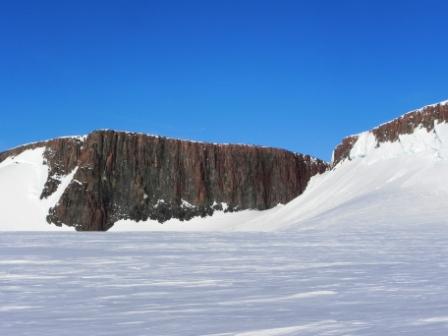 They ride on and it is exhilarating skimming over the ice in a big arc with the landscape becoming ever more breath-taking. 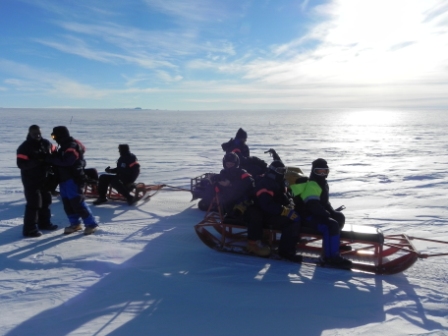 Then suddenly, the charioteer reigns in, dismounts and orders all the guests to do the same. He points ahead to our destination. “What? – way over there? I’m not going to walk all that way,” wails the ‘handsome prince’. He knows that in Antarctica’s vast landscape, things look much closer than they actually are – and the Palace looks miles away. (In the photo, it’s over the lip, where the dark blue shadow meets the rocky slope). The ugly sister encourages him, “Just try – it’s got to be worth it”.

Slip-sliding our way to the Palace

They see the chief and his side-kick putting on horse-shoes/crampons. “Are we getting those too?” says ugly sister in a small scared voice. “No – we wear them, so that if any of you hurt yourselves we can help you,” says chief horse-man, with a re-assuring grin. “It’s not far, just walk carefully and you’ll be fine.”  Now there’s an expanse of blue ice to cross, like a skating rink – but hang on, no-one’s got skates….. “Just take small steps and slide along,” says Rinier. What – in these gigantic boots, with tractor tyre grips on the soles? But, amazingly, they work and they  all skate – although not very elegantly, across the ice. Ugly sister and ‘handsome prince’ are at the back, taking small careful steps, while the daring, dashing young guys are running, sliding and hooting with glee. Someone falls every now and then, but no-one’s badly hurt and it is all part of the fun. There is time to gasp at the icy landscape. Then there’s some lovely compacted snow to scrunch across, before they reach an innocent-looking patch of jagged ice lumps. A smooth snow strip snakes its way up the mountain from there. Who would guess this was a hidden crevasse? The intrepid charioteer sidles up the slope on the opposite side to get across and then places the ladder over the jagged ice for the guests to cross. “You can cross in whatever way feels most comfortable,” he says. 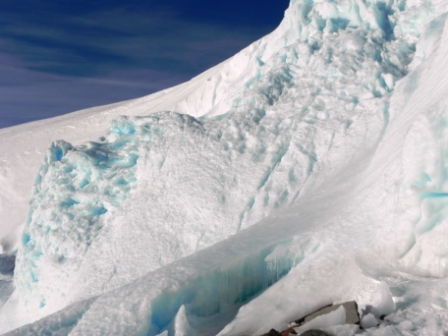 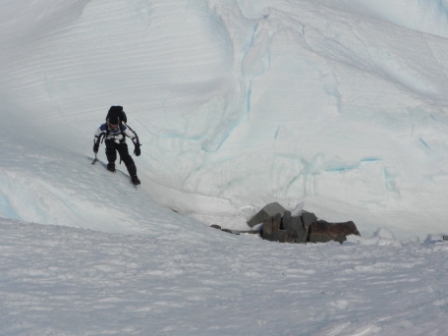 Ugly sister goes across on hands and knees, bum in the air – she no longer cares about looking dignified. Most go across in similar fashion. Now there is a choice between the rocks and a hard place – a small, even more slippery ice rink. Ugly sister and ‘handsome price’ go for the rock option. They puff, sweat, stagger, drag their wobbly leaden legs over the wobbly jagged rocks. And finally they are there at the magnificent Crystal Palace. They flop down on rocky seats, along with the other guests. There’ll be no dancing (ugly sister forgot her glass slippers in any case) but some refreshments are allowed. Awe-struck and humbled, they sip their drinks in that sacred place. 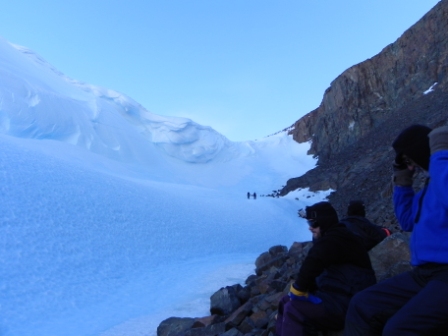 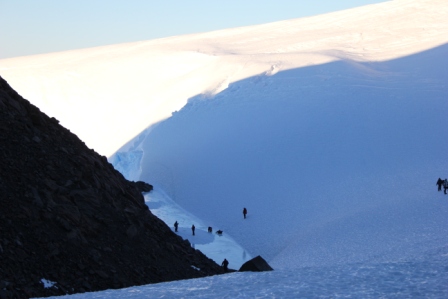 The charioteer and his 2nd in command head further up the slope in the V of the valley, where snow curls over the top of the mountain like thick icing sliding off a cake. Thanks to whoever took this photo from high up on the slope above the Palace – can’t remember who!) The sky is ultramarine against the dazzling white of the snow. 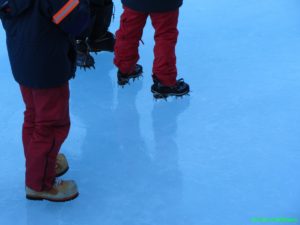 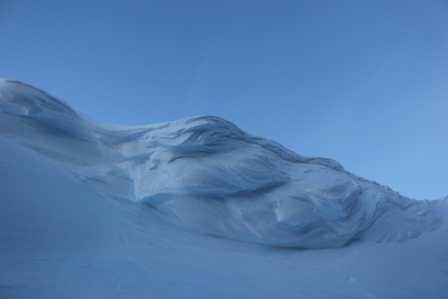 All too soon it is time to head back. When all the guests have retraced their steps (some more surefooted than others with crampons to traverse the blue ice – this photo taken by Stef) and crossed the ladder safely, the charioteer and his 2nd in command make a hole in the snow-bridge with their ice-picks. Everyone lies down to peer down into the dark blue hole of the 50 metre deep crevasse. 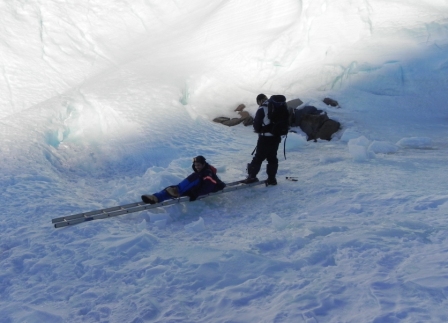 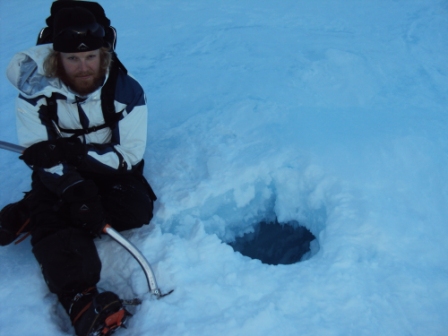 One bumbling guest steps too close and his foot makes an alarming hole in the snow bridge – he is sharply reprimanded. On the way back the most adventurous guests have fun sliding down a long slippery slope. Ugly sister and ‘handsome prince’ just watch and laugh…. and wish they were 30 years younger…. Then it is back to the chariots and they’re homeward bound. Although horseman/pilot, Tjaart is keen to gallop home, his steed is sluggish. He snorts furiously (the horse, not the horseman), obstinately digs his hooves into the snow and refuses to move on the upward slope. Gallant ‘handsome prince’ gets off as does another guest and then the horse canters effortlessly to the top. Poor tired ‘handsome  prince’ has to trudge up the hill to his chariot. It’s a smooth ride from then on, with a few more photo stops along the way. The SANAE IV base is on the right-hand cliff, in the photo on the right, but you can’t see it from the bottom. 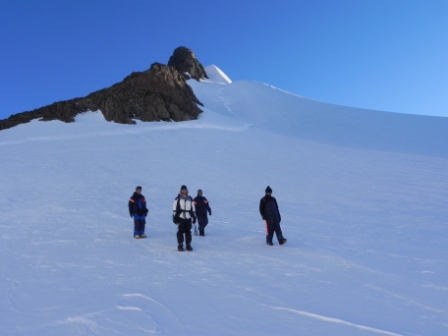 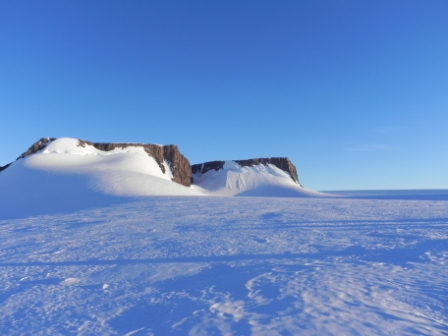 What a ball they all had at Crystal Palace. The ugly sister and her ‘handsome prince’ agree that it is one of the best experiences of their lives. No words can describe or do justice to what they saw, and neither can the photos really, but for what they’re worth, some of the best are in this post.

2 thoughts on “A Ball at Crystal Palace, Antarctica…not a fairy story”