Something wild and wonderful happens each year on Bird Island, https://www.birdislandseychelles.com/ , Seychelles; from about mid-October to mid December, Green and Hawksbill turtles come up out of the sea to lay their eggs. We were lucky enough to be there and witness this in 2008.

Bird Island is owned by an old Seychellois family. It is not a luxury resort. Their main focus is conservation. This is what makes it special. Many scientists come and go. When we stayed there, Roby was the ‘hands-on’ man who patrolled the 5 km perimeter 4 times a day, making his notes. He is passionate about what he does and gave us a wonderful talk on all the creatures that populate this small coral island. Look out for future posts on Bird Island. 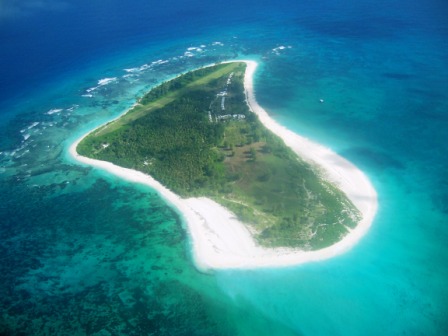 Roby had told us that a green turtle had come up to lay but that for some reason she had changed her mind. He said that very often they will come back the next night, so if we were lucky we might see her. After supper, we set off up the beach with another couple. It was rainy and windy and heavy going in the soft sand. The other couple turned back but we decided to continue for a bit. Suddenly we saw sand flying up into the air and there she was. She’d just begun digging with her front flippers. It was 9.15pm.

We could see where she had come up the very steep sandbank. She must have been exhausted, as instead of going further up the beach beyond the high water-mark, she’d begun  digging just over the rim. We crept up quietly behind her and lay down on our tummies at the edge of the hole. Talk about ‘private box/front row’ seats! She didn’t seem bothered by us at all. Very slowly and laboriously she dug a very big round hole with her front flippers. She then dug a much smaller, deeper hole with her back ones. Roby had told us that once turtles start laying, they are so focused that nothing will distract them from getting the job done. We hadn’t disturbed her up until then, so when she started laying, we felt we could risk turning on a small torch. She didn’t react at all so we were able to watch the whole process.

We could just see the ping-pong ball sized eggs plopping down behind her back flippers. I counted 62.  To cover the eggs, she flicked sand behind her with her front flippers and paddled a compact wall with her back ones, moving slowly forward as she did so. Although she didn’t grunt, it must have been a huge effort, as she rested between every scoop. And then she was finished – probably in more ways than one! She turned towards the sea. We wondered if she might tumble down the steep bank and end up on her back, but she shimmied down on her shell with flippers out of the way as easy as you like and off she went, back into her watery domain. These were the only photos we took – in case we disturbed her. 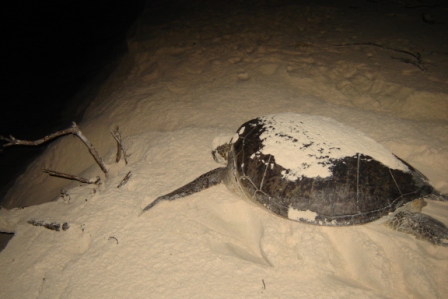 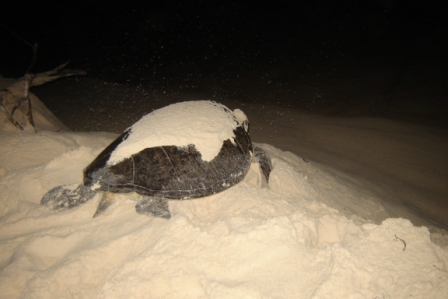 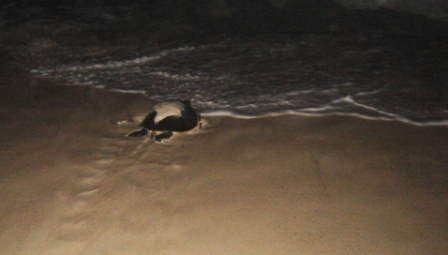 We marked the spot 12 m in from the nest, as we felt sure with the whole nest would be washed away when the tide came in.

We got back to our bungalow at 1.20am. We felt totally over-awed by the experience. Sadly the nest was gone the next morning. But she would have been oblivious, thankfully. This photo shows the stretch of beach where her nest was washed away. 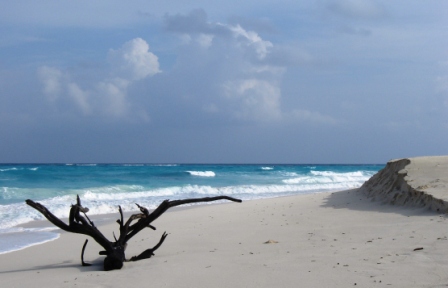 I went for a walk on my own a day later and was happily snapping away with my camera. I’d just taken a photo of a rocky area when I saw a Hawksbill turtle coming out of the sea to lay! 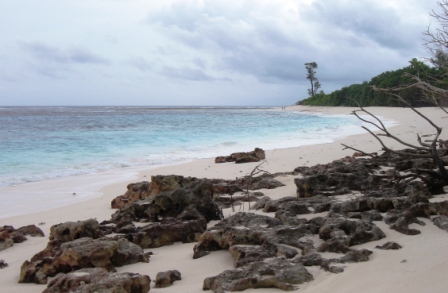 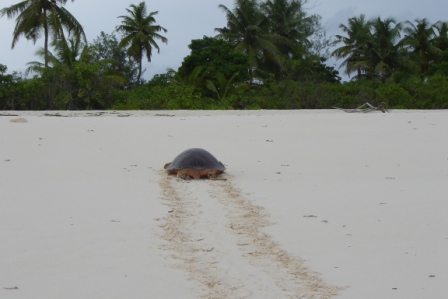 She went right up into some bushes, above the high water-mark. Turtles are very short-sighted, which is maybe why she seemed to bumble along, bumping into bits of driftwood and then having to clamber over them. She grunted as she went along and had little rests too, She wedged herself in under some branches and I wondered whether she might get stuck there and whether Roby ever helps them in these situations. Another couple arrived and together we watched her digging her hole – only at the back, unlike the green turtle. Her eggs came out more than one at a time – sometimes 5 at once! Roby arrived and he broke off some branches around her and said we could scoop some sand out from the back to get a better view. I got some good photos and also a little movie! 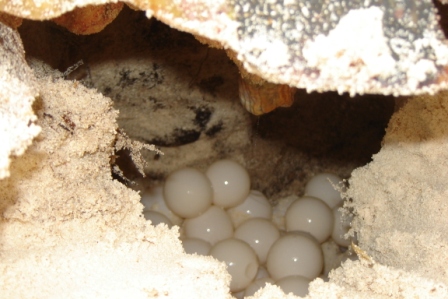 Roby wanted to measure and make his notes etc., so we left him and her to it. Green turtles lay far fewer eggs than Hawksbills, who can lay up to a staggering 230 eggs.

Wild and wonderful is the only way to describe these experiences!

You can read more about turtles here and how you can help with their conservation and preservation: https://conserveturtles.org/