New Zealand, November 2006 – this is summer, right? I’d brought a fleece and boots with me, just in case, but not gloves. It was cold. My first stay was with a friend and her family in Christchurch.  She lent me some gloves and her kind husband helped me plan a little solo jaunt around South IsIand. Sadly, no-one was free to join me. Climbing a glacier sounded like a fun idea. The pictures of the ice with its dazzling array of blues drew me like a magnet; tick, pay. Franz Josef is a pretty little town on a lovely sunny day. 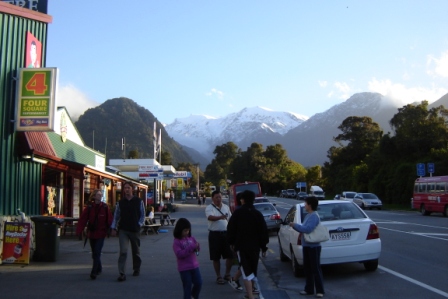 You can check out its website for things to do: https://www.franzjosefglacier.com/

But the day I arrived it was raining hard and very cold. “I presume the climbing of the glacier tomorrow will be cancelled in this weather?” I said. They laughed. “We would go out of business if we cancelled just because it is raining” they said. I didn’t sleep well at all, and prayed all night that the rain would stop. It didn’t. As we set off on the muddy road the next morning, I noted that I was probably twice the age of everyone on this crazy venture/adventure. My apprehension was off the clock.  We had to wade through rivers which were fuller than normal. Water sloshed into my boots. In no time at all my non-waterproof gloves were sodden too. We arrived at the foot of the glacier, which was an impressive site, with its gaping blue mouth. 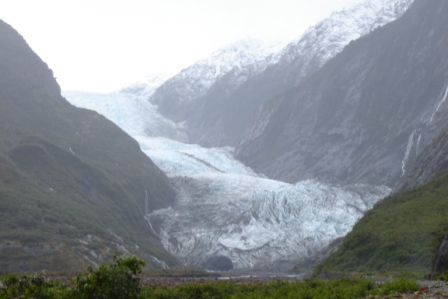 But it was utterly terrifying looking up at the vertical wall of ice that we were supposed to be climbing. Crampons were handed out. My hands were so cold and shaky that clipping them on seemed impossible.

Thoughts were jostling for supremacy: “This is crazy! What if I break an ankle? My husband is thousands of miles away and what an inconvenience it will be for any of my friends if I have to be rescued” and “How can I pull out now? I’ve paid for this. It will be so embarrassing. I’m such a wimp.” The first thoughts triumphed. I said to the guide, “I can’t do it. Can I just wait here for you all to come back down?” “You can’t wait here – too much likelihood of a rock fall. We’ll only be back in an hour, so you will have to move about to keep warm or you might end up suffering from hyperthermia.” He took me a little way away to a small area where it would be safer – and I began my round and round in circles keeping warm routine.

I’m guessing about half an hour later, when I was still cold, but also bored and a bit dizzy, I saw a young woman striding towards me. The guide had radioed through to the office for someone to come and get me. Jolene seemed totally unaffected by what South Africans would consider foul weather. She had such a spring in her step. This was all in a day’s work for her. She’d brought a thermos of coffee for me. 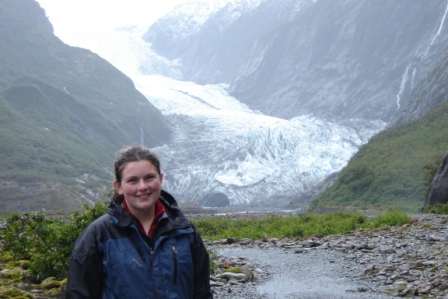 So this frozen Foote, cold-footed it out of there with her tail between her legs!

P.S. Since 2012, no-one has been allowed to climb up the glacier to the top from the valley floor. The glacier is melting so fast that it became dangerous. The only way you can get onto the glacier now is the expensive way; by helicopter. That is probably what I should have done! You can still walk to the glacier, but it doesn’t look nearly as impressive as it did when I saw it – sad. Check out this website debunking the theory by some that global warming isn’t happening: http://www.durangobill.com/GwdLiars/GwdLiarsFranzJosefGlacier.html