Who in the world would not be charmed by puffins?! They are also known as ‘sea parrots’ or ‘clowns of the sea’ because of their brightly coloured beaks (which fade to grey after the breeding season). You can see them at various places around the UK. I’d seen them from a boat off Skomer island in Wales, a couple of years back, but was keen for more. We’d been told that on the Farne Islands off the east coast of Northumberland, one can disembark and get ‘up close and personal’ with them. A staggering 70,000 or so fly in to breed there every year. At least 21 other species of seabirds also converge on these islands between April and July, but, not surprisingly, the puffins are the main attraction.

We were in the UK in Jun 2014 and decided we couldn’t not do this, and that we’d explore Northumberland as well. Look out for a post on this. We booked an all day trip to the Farne Islands, which are only a 30 minute boat ride away from the picturesque town of Seahouses.

“Hats are advisable” we were told. We had our caps, and our daughter, Sal, was able to buy one at the shop near the harbour. I couldn’t resist buying a stuffed puffin for our grandson. I fluffed and called it a ‘puffed stuffin’ and then decided how appropriate that seemed for these delightful little birds.

As we waited to board our boat, some serious photographers were disembarking and it became clear why hats were advised! 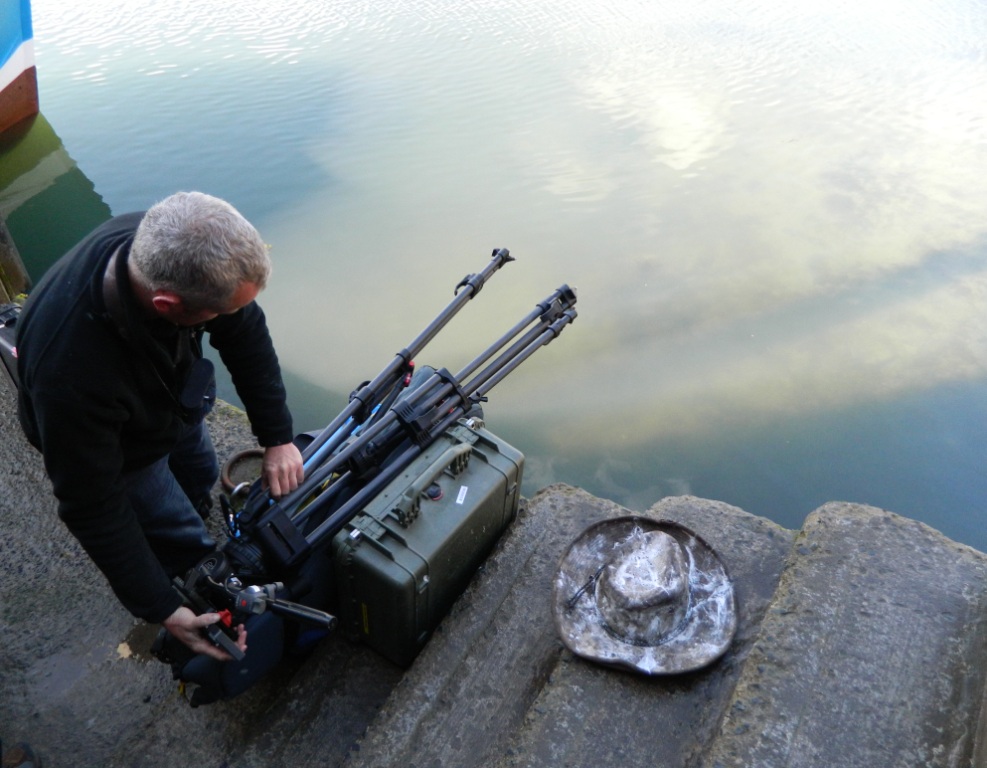 There was some jostling for space amongst the 100 or so other bird enthusiasts, boarding Billy Shiel’s open boat (the only company that does all day trips). Many were toting cameras with huge telephoto lenses and one man was even in camouflage gear and wearing knee pads to get those perfect kneeling shots! On the way out we saw thousands of birds, including puffins, crowding the rocky cliffs, flying overhead or bobbing about in the sea. 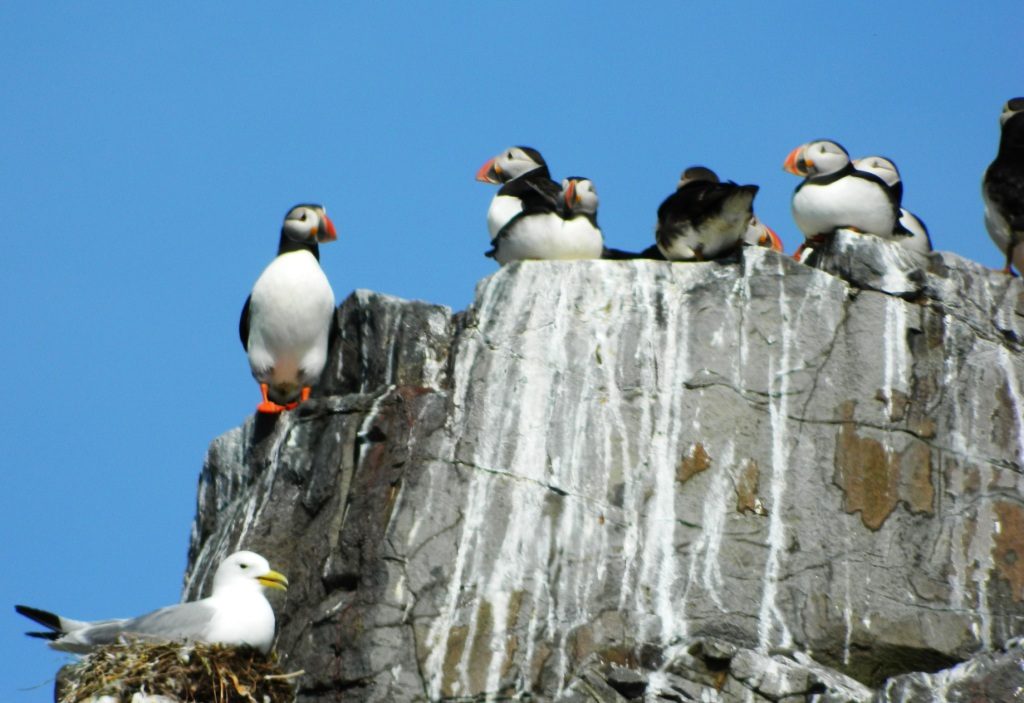 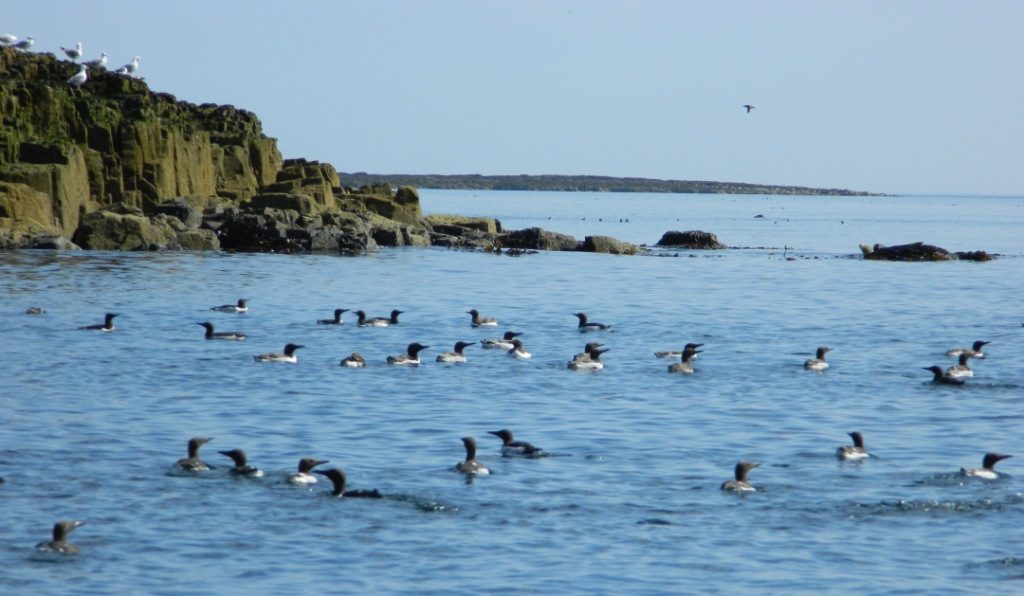 The puffins have to get up some speed on their watery runway before they are able to take off. Here is Kellie Netherwood’s excellent photograph of a puffin getting airborne. Her website is well worth a visit:  www.mydestinationunknown.com Lots of grey seals, lolled about on the rocks as well, or swam in lazy swirls in the water below. 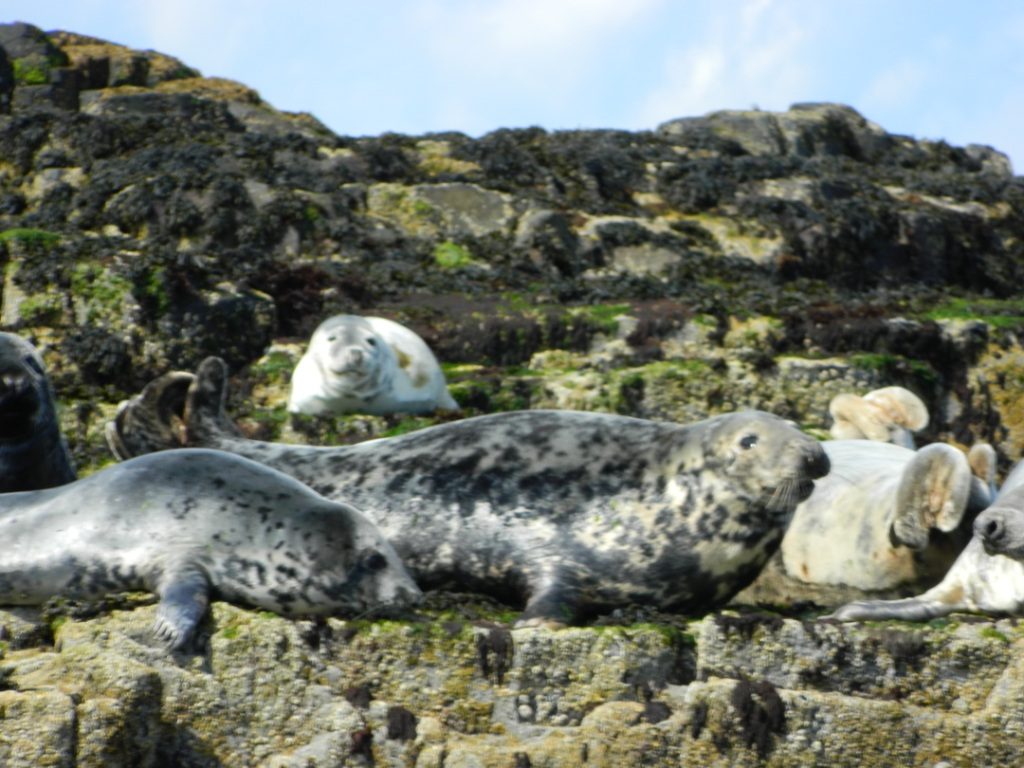 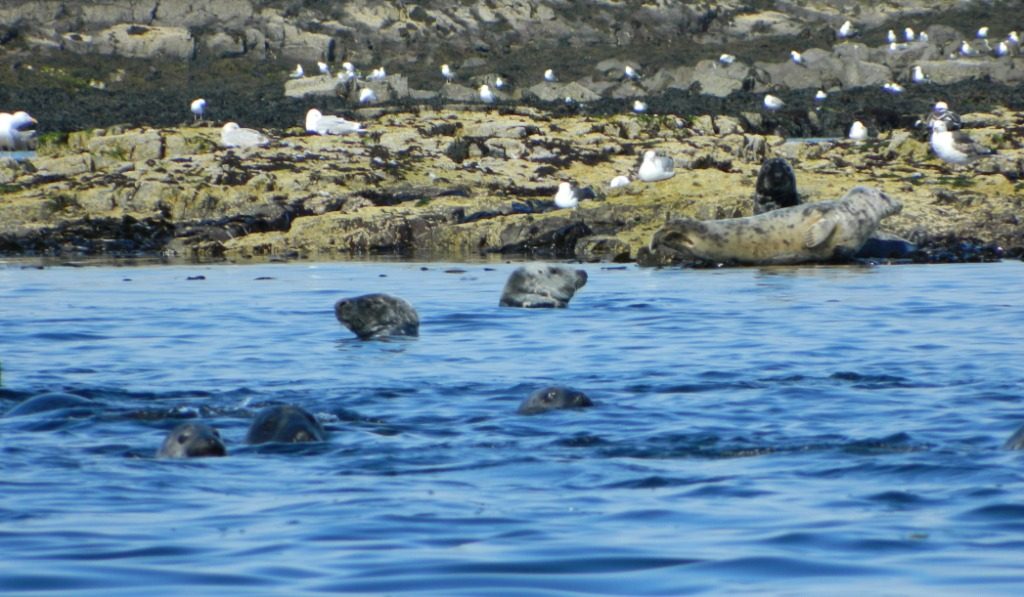 This was our first port of call and once we’d disembarked we were able to spread out along the wide roped off paths and bird-watch or photograph to our heart’s content. 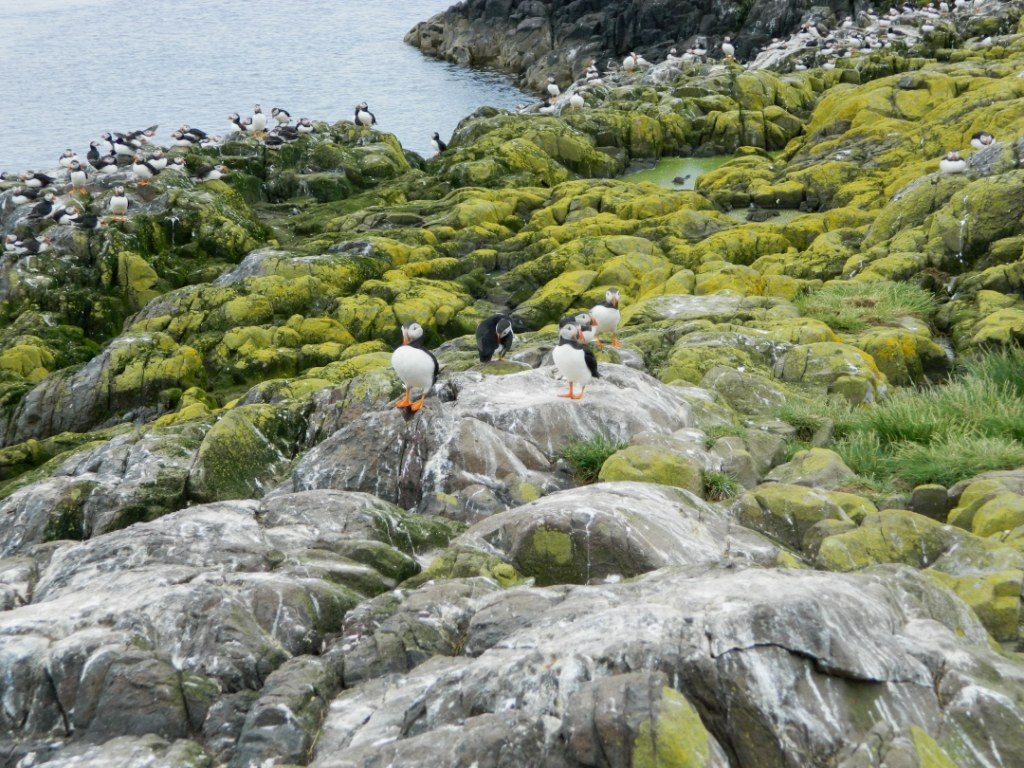 And none of us, it seemed, could get enough of the puffins!   EVERYONE strove to get shots of them taking off, flying overhead or landing. This is not at all easy, but Sal succeeded in getting some great shots. And this was my best effort!!: 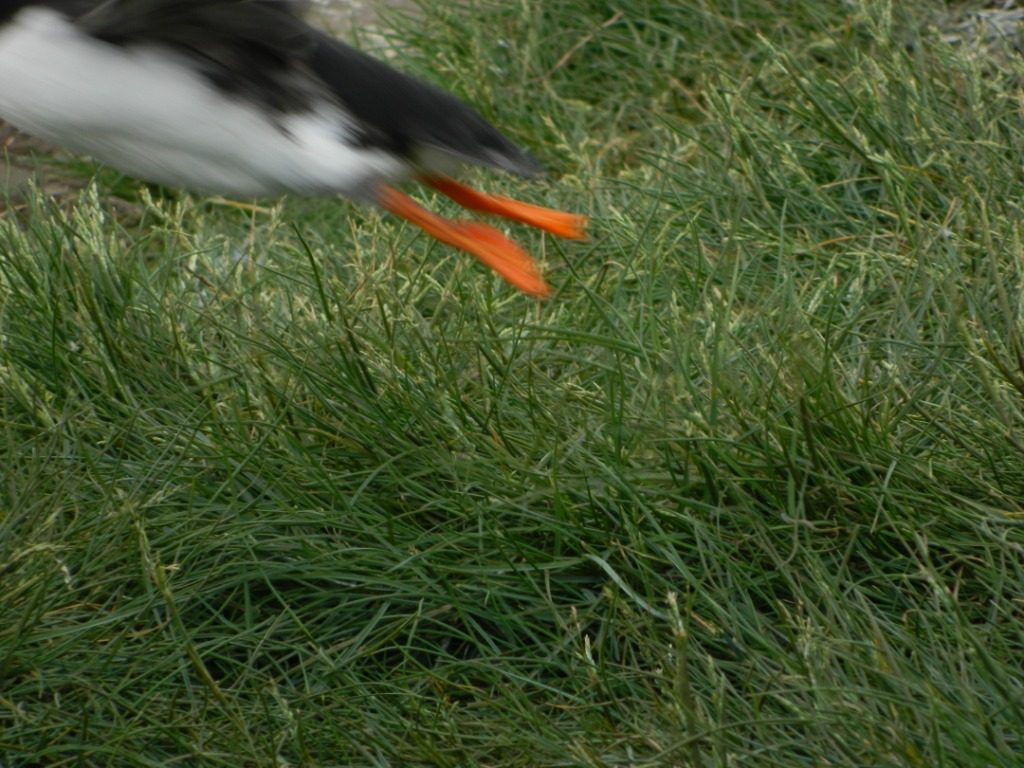 There is something so endearing about these little birds with their webbed orange feet, standing about in pigeon-toed poses before taking off on yet another fishing mission. We spent a couple of hours on this island.

Here are some interesting facts about puffins:

This was a different experience altogether! As we alighted and started walking along the path, we were bombarded by the furious attacks of Arctic terns. They zoomed in with ear-splitting shrieks, wings outstretched and beaks agape, and pecked and messed on all of our heads. Sal got some excellent action shots. 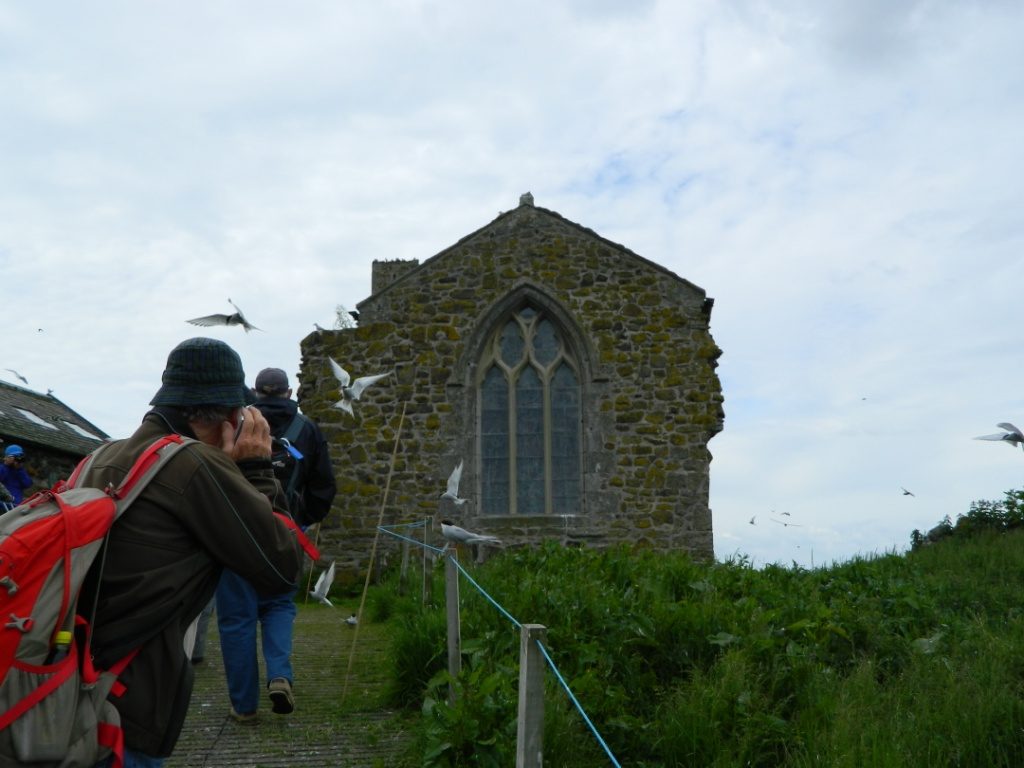 And here is Sal’s photo of us after we’d been on Inner Farne for a while! They were trying to frighten us away from their nests and chicks, but this was impossible because most of these were right next to the path.

Research has shown that although the islands are predator free, Herring and ‘Black-backed Gulls, still predate the eggs and chicks of the Tern species. The Terns have got clever. They have realized that the closer they nest to people and buildings, the lower the predation! Don’t go to Inner Farne if you have a phobia for birds!

Once again we were treated to a surfeit of puffin activity.  The whole island is a virtual Swiss cheese of puffin burrows; Sal’s photos. 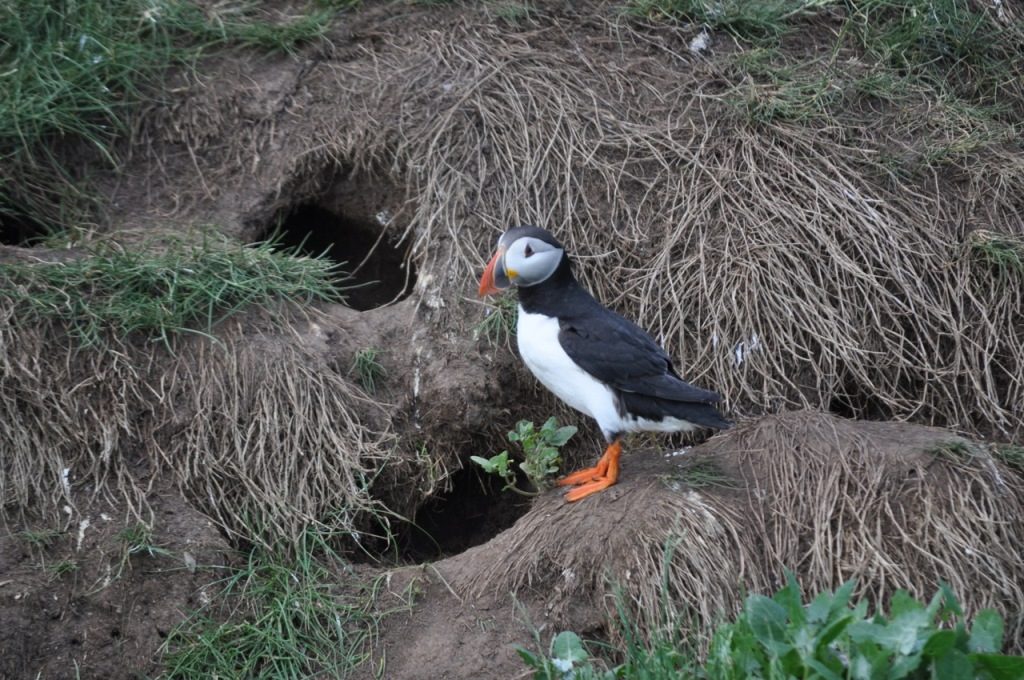 But on this island it seemed much more stressful for them. They were a lot more gulls about and the puffins were skittish, constantly keeping an eye out for them. The cheeky gulls wait by the burrows and then, when the puffins swoop in and land with a beak-full of fish, they cheekily attempt to steal their catch. It was mesmerising watching the puffins determinedly flying to and fro and then  hurrying down into their burrows with their catch. No sightings of pufflings of course – they were still growing fatter in their burrows. 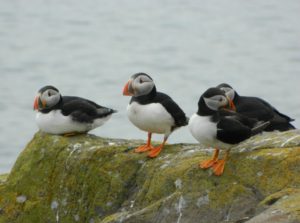 I’ve focussed on the puffins in this post, because for us and so many others, they stole the show!  But there were plenty of other birds; guillemots. shags, terns, fulmars, cormorants, eider ducks etc. etc. and you could photograph them at close quarters too. Look out for a future post on them.

If you’d like to read more about the research done on these islands and the day to day happenings, go to http://farnephoto.blogspot.com On the 3rd of August 2014,  there were only a few puffins who hadn’t flow off to sea.