Heading to the BIG CITY

The country bumpkin chick has made a cozy little nest in Esher with her surrogate parents.  But she is becoming conscious of overstaying her welcome. It is time to pluck up the courage to spread her wings and fly off to London, the BIG CITY. Kate, only an acquaintance, has kindly said she can stay with her and her housemates for a bit until she finds somewhere for herself. Kate has bought ballet tickets for the evening of the day that she is coming into London. The plan she suggested was to leave the big suitcase in a locker at Victoria station and then meet at the ballet. A ballet on her first night in London – what an intro!

How did she get from Esher to Victoria station? Blank. But it’s a small triumph. The crowds! She pays for a locker and heaves her ridiculously large case into it. It is a relief to have both hands freed up. She is wearing her duffel coat with big deep pockets. 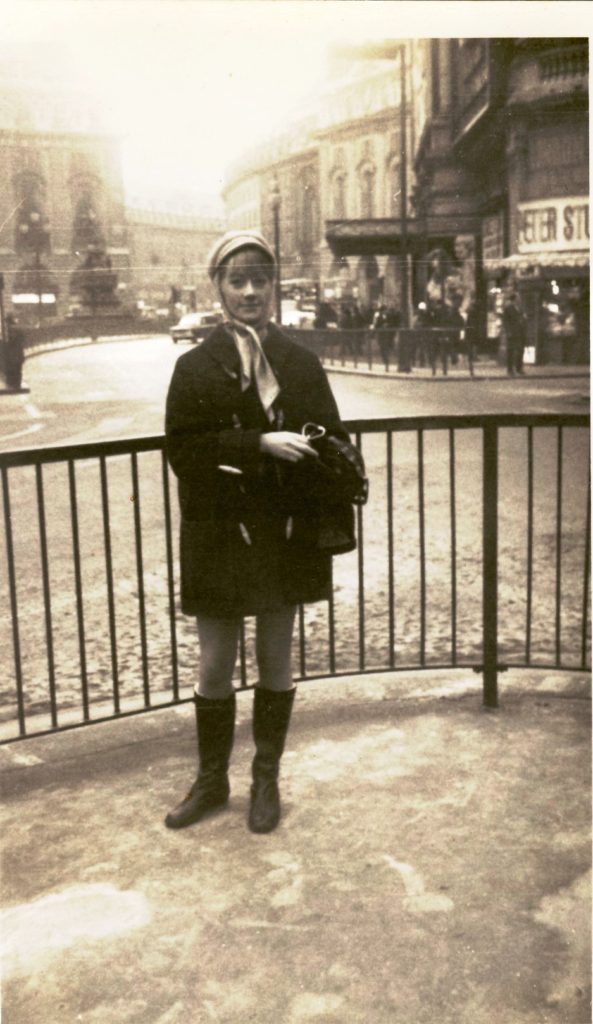 The duffel coat. The amount charged for this poor photo was also a rip-off!

She puts the small locker key with its red plastic identification number on it into her purse and tucks that deep into one of her pockets. She meets Kate at the ballet. Again, she is amazed at how crowded it is. There is much jostling and bumping. What ballet was it? Blank. Did she enjoy it? Blank.

She is so relieved that Kate will take the lead in getting them back to her house. She reaches into her pocket for her purse so she can pay for her transport home. Her pockets are empty. Her purse is missing. Someone in that jostling crowd was a pick-pocket. She goes into panic mode.  Her South African Identity document was in there, as well as some English money – and what else? Blank. And then she remembers the key for the locker which holds her suitcase containing all her worldly possessions, as well as the key to unlock the case. S…t! She’d had the sense at least to keep her passport separate.

Kate pays for transport for both of them to her house. She is mortified that is has started this way with Kate, whom she hardly knows. Did she sleep a wink that night? Blank, but probably not, because she was racking her brains to try to remember the number of the locker. In the morning, Kate lends her more money to get to Victoria Station. She has just enough to use public transport to get there and then return by taxi because of the big case.

Avoiding rush hour, she finds her way to Victoria. She wills herself to remember how she’d walked among those rows of lockers the day before, staggering along with her case, and which one it was in the row – and she thinks she has it! The desk clerk stares unfeelingly at her as she explains her predicament. They agree to open the locker she says is hers. And, halleluiah, there it is; her ugly, cursed, but very precious case! But now they won’t let her just take it. Before they break the lock, she has to say what is in it and be pretty specific. This she is able to do. She was always good at memory games! So, she has her case.

Now there’s only the easy bit; the short ride to Kate’s house in a taxi. Then she can breathe easy. Her first ride in a London cab! Feeling mightily relieved that at last, things are looking up, she flags one down.

She calls out the address from the back to the not so friendly looking cabbie. Kate had said it was a short ride. She starts getting alarmed when the meter starts edging toward the total of what she has left of Kate’s money. Is the cabbie trying to rip her off because he can see she is a rookie tourist? So she tentatively repeats the address and says she’s been told it was only a short distance from Victoria. Snappily, “Do you want St. George’s Street or St. George’s Square?” Big sigh, “It must be St. George’s Square”. He drives, and drives some more, and eventually he pulls up in front of Kate’s house. By now the meter reading is way over what she has left. This is just all too much. She bursts into tears, “This is all the money I have – I’m sorry!” And she grabs her case and runs….

Read another early and not such fun travel experience here:  https://footeloosefancyfree.com/missing-the-boat-train/ ‎

Welcome to my travel blog. I hope the posts will inspire you to travel yourselves, even if it is only from the comfort of your own armchair! The majority of the photos on this website are mine. I’ve acknowledged those that aren’t, including those taken by my daughter, Sally Foote. Many thanks to my son who designed the Header for my blog. His website:

The gallery below hints at what’s to come in future posts.

Okavango; Our guide with a chameleon.

Le Morne, Mauritius, from the air