This was my first post on my new blog. I’m reposting it because I had a ‘lightbulb moment’ on the Northern Lights cruise I went on, and it is something not mentioned in the adverts for cruises or excursions. I just feel so strongly that people need to be prepared for what to expect.

Put on you winter woollies and join me on a Norwegian winter cruise!

Mesmerized I was, watching the brilliant greens swirling magically across the sky of the TV screen. There were hints of blue, purple, pink, red. “Oh, how I would love to see that!” I breathed. “Why don’t you then,” said my generous husband. He was going away soon to work in Antarctica. So, off my sister and I went to Iceland for a 4 day “Northern Lights” tour. Naively, we simply assumed we would see them. Wrong. It was overcast the whole time we were there. One requirement: Clear skies. Years went by. Back on the couch, watching another showing of The Lights on the flat-screen sky – sigh. “Why don’t you try again”, my lovely man said. He hates the cold (going to Antarctica was a work thing) so didn’t want to come with me. This time I did some research; about best months, locations, tours etc. In the end Hurtigruten’s 12 day Northern Lights Norwegian cruise with their guarantee of a free 5 day cruise if you don’t see Them, seemed like the best option,

In search of The Lights

So on 12th March, my lovely long-standing friend and I set sail from Bergen on MS Nordlys. We would overlap the Vernal equinox, equinoxes reputed to be good times to see Them. It would also be ‘warming up’ – this South African is not used to the cold! The weather was gorgeous and we were enjoying the cruise enormously. We attended interesting lectures and a film about the Northern Lights – only to be told by Diego, one of the Expedition team members, that it was ‘mostly rubbish’! What is fact though is that the further north you go, the more likely you are to see Them. So excitement mounted as we got closer to the Arctic Circle.

News spread that there’d been a solar flare, another important requirement for the Lights to make an appearance. Dinner on the night of 14th ; “The Northern Lights are visible on the starboard side of the ship”. We hastily pulled on coats and gloves and rushed up on deck. All we could see were ordinary-looking greyish clouds moving about a bit and they faded away quickly. These are the Northern Lights? Surely not?! Just climbing into bed; “The Northern Lights are visible on the port side of the ship.” We pulled on our warm gear over pyjamas and headed up to Deck 7, me lugging tripod and camera. But where are they? There were more greyish clouds than we’d seen earlier and they were swirling, but why aren’t they emerald green? I thought I’d set up my new camera correctly, but it wouldn’t take pictures. After many fumbled attempts in the dark with frozen fingers, I gave up. Well no free cruise for us now, as we had apparently seen them – we were disappointed to say the least.

The next day, for the first time, we heard the honest truth from Diego; mostly one will see only shades of grey or pale colours if you’re lucky!!! It is only when the Kp index is very high that you will see bright colours – and that is extremely rare. I was amazed that I had not heard this before – it’s as if it is a well-guarded secret! This excellent article gives the explanation:

“The simplistic answer is because human eyes can’t see the relatively “faint” colors of the aurora at night. Our eyes have cones and rods – the cones work during the day and the rods work at night. Thus the human eye views the Northern Lights generally in “black & white.” DSLR camera sensors don’t have this limitation.”

Diego also gave a lecture on how to photograph Them specifically from on board a moving ship. And I also discovered why I couldn’t take pictures – I’d missed a small little button that also had to go onto manual! This gave me confidence to try again.

On the 15th it was still cloudy when we went in to dinner, but we’d been told that if it cleared there was a good chance we would see Them. We’d just lain down, still dressed in all our warm gear just in case, when the announcement came that They were here and likely to be stay around for some time. So up we went – the glove I’d kept dropping was now attached to my sleeve with tooth floss! The sky had cleared and the grey Lights were swirling slowly above us.Aim, shoot, check  – WOW – emerald green! 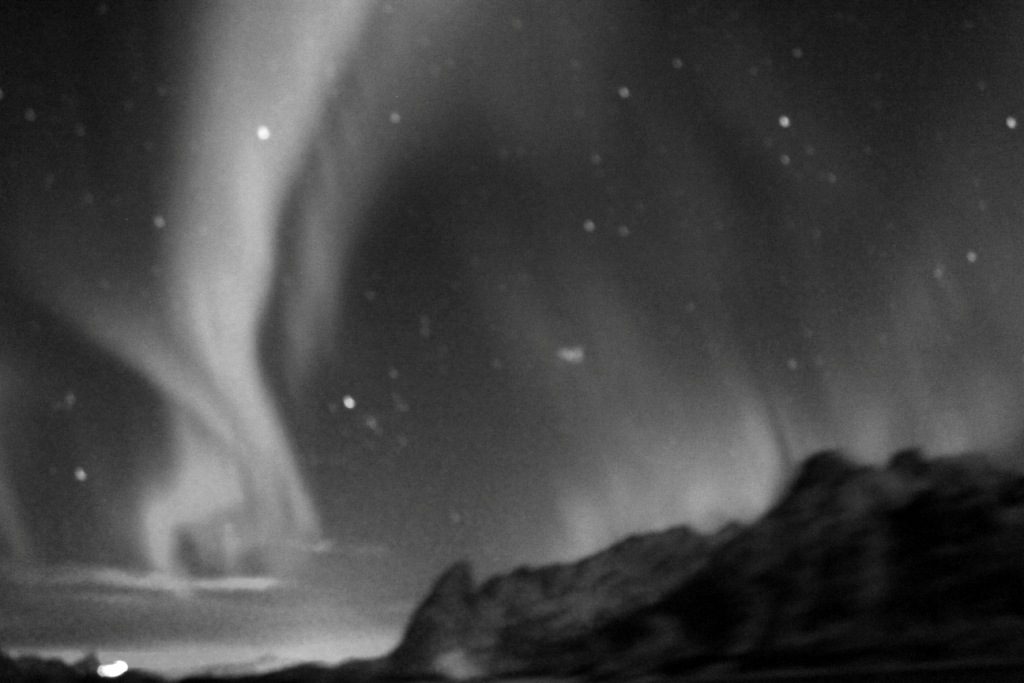 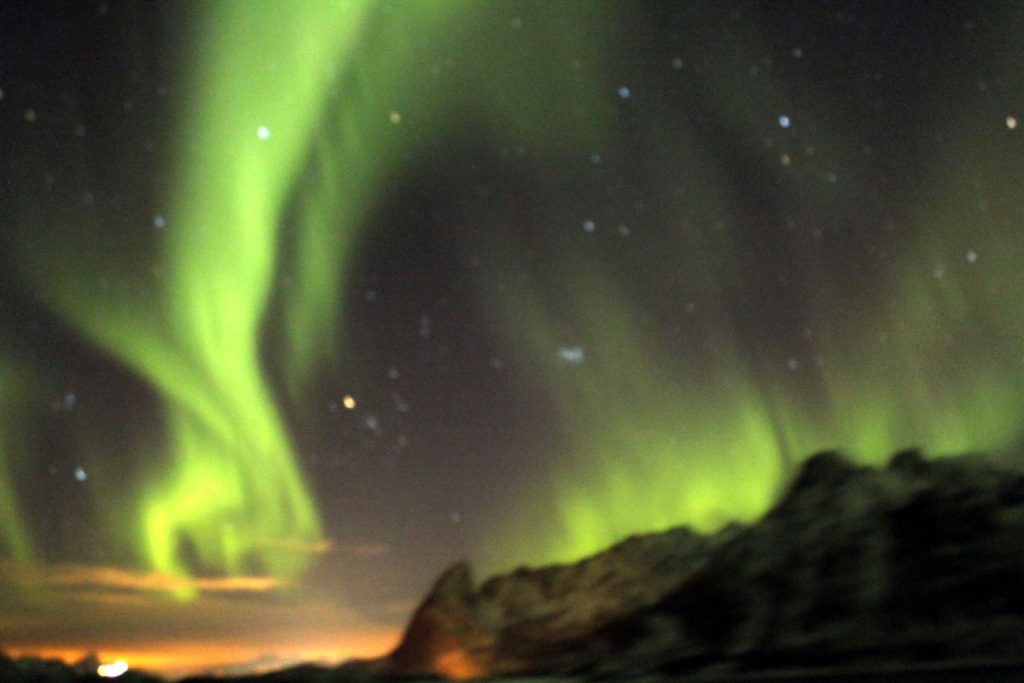 The photos are blurry, due to two things; the boat moving and my inexperience. But you get the picture……

From there, it felt as if we were living a Norwegian fairy tale; it was calm enough to sail up the narrow Raftsundet strait up all the way up to the entrance of Trollfjord between the beautiful snow-clad mountains. 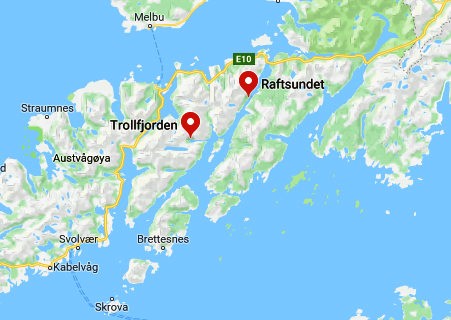 The Lights swirled above us for hours, so I was able to take lots of pictures but also just enjoy looking up at them. Mostly they swirl quite slowly, but at one point, they suddenly moved very quickly and we saw a flash of pink. 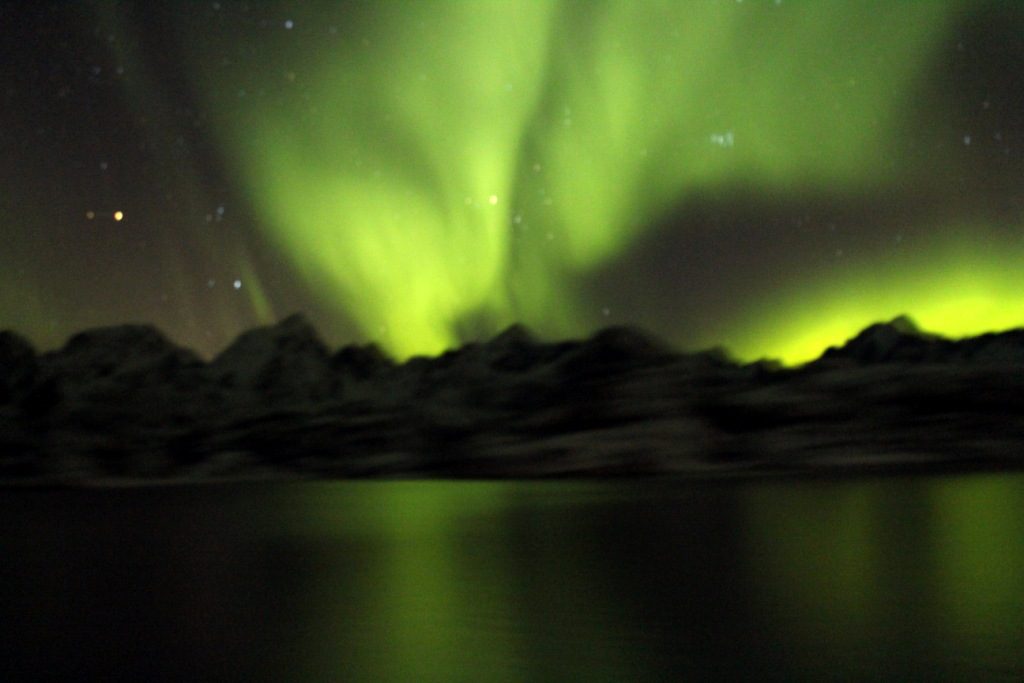 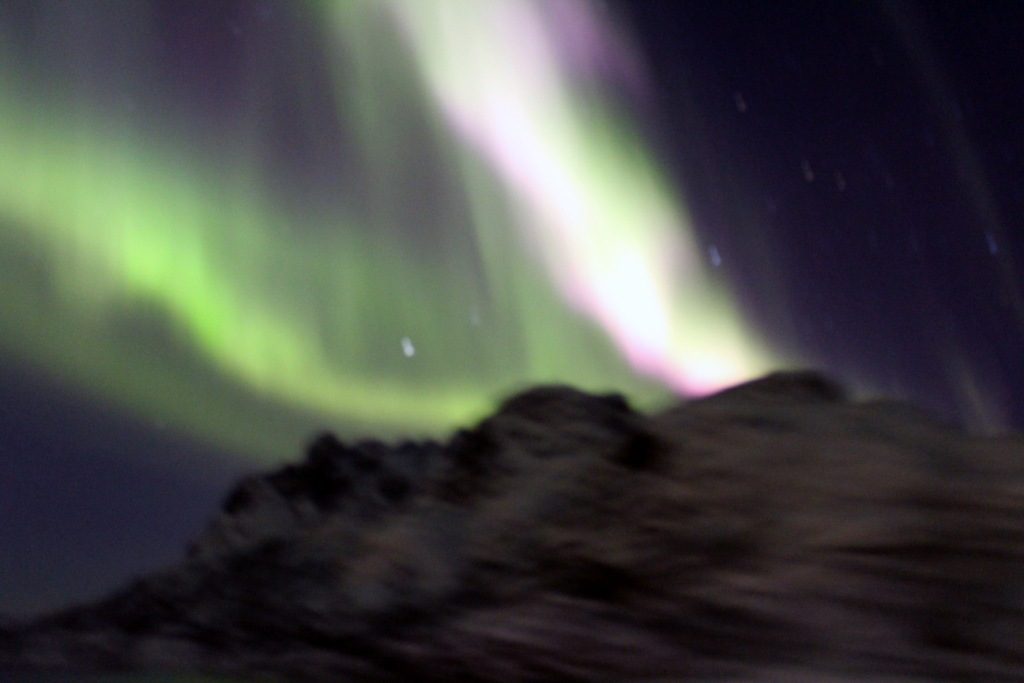 Now that we knew the truth about them we could be mesmerized, even though they were in black and white. We were served fish cakes and a hot drink called Trollfjordknert, out of tin mugs with a troll design. There was a wonderful sense of camaraderie and shared excitement on deck. It was long after midnight when they started fading and we went back down to our warm cabin with our souls full to overflowing. Here are a couple of Diego’s wonderful photos, taken on the same night, much reduced of course: 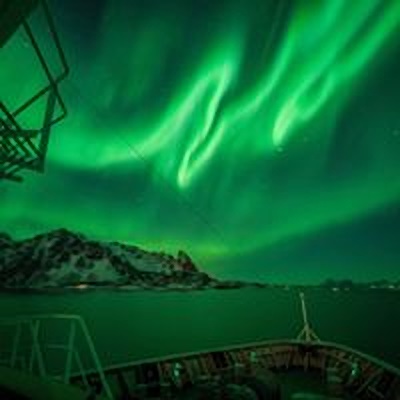 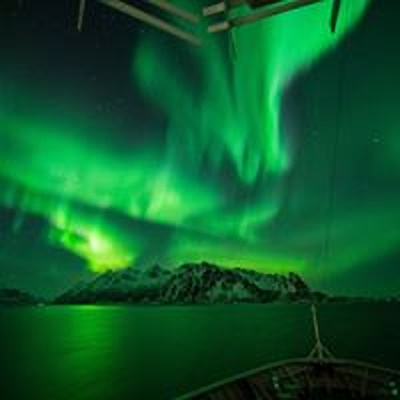 Anything after that was going to be an anti-climax. On the night of day 7, the announcement came that They had appeared. Conditions were less than ideal; windy, rough sea, very cold, deck rocking and slippery. But we braved it. We had to brace ourselves and the tripod and camera. Marie was hanging onto my jacket! I got a few rather bad pictures and because the intensity of the Lights wasn’t as strong as before, the colours on the camera were also paler but did show up pink along with the green. Then on the night of Day 8, They were back again. This time, there were ordinary clouds as well, which showed up strangely orange in the pictures.

Shining a Light on the Technical

I was always more keen on the spectacle than the technical, but there are many excellent articles on how solar flares affect the geomagnetic sphere of earth. The storms the flares cause vary in intensity on a scale from 1 – 5. 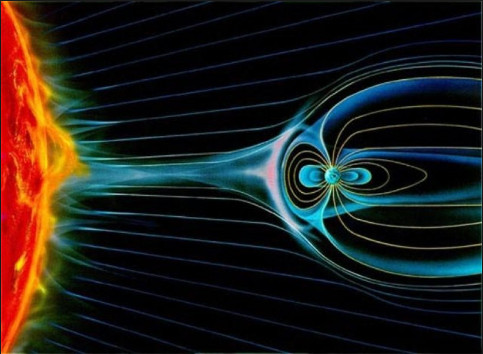 The Kp index, which is strength of the Lights that one sees is linked to this and measured from 1  – 9. We think that our best night, the 15th to 16th March, was about 5. It is easy to get forecasts of the Aurora but I’ve not been able to find records of what the Kp index was on these particular nights in Norway.

In her Dangerous business travel blog, Amanda posted a very good  article: “9 lies (and one truth) people tell you about seeing the Northern Lights”. https://www.dangerous-business.com/2016/10/northern-lights-facts/  It’s worth a read but I will tell you what the one truth is: If you have seen Them, you are most definitely going to want to see them again!

P.S. If you missed my other post, with tips about booking and packing for a Northern Lights Cruise, here it is: https://footeloosefancyfree.com/northern-lights-cruise-check-list/ ‎

P.P.S There is much more to this cruise than seeing the Northern Lights. It was a once in a lifetime experience.

P.P.P.S. Here’s my tongue-in-cheek post on the Northern Lights – a poor man’s checklist to see them!